Comparative Perspectives on the Path to Annihilation 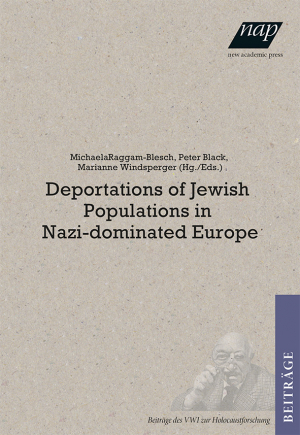 Transit facilities and railway stations used for deportation have been rediscovered as central sites of the Shoah in recent years. Public memorials and monuments recall the deportation of the Jewish population to ghettos, annihilation camps, and sites of mass murder. What has long remained a desideratum is a comprehensive, comparative, and analytical overview of deportations from territories under control or influence of Nazi Germany. This volume aims to determine differences and commonalities in the organisation and implementation of deportations in Nazi-dominated Europe. It analyses the relationship between central hubs of the “Final Solution” and local civilian, military and SS-Police authorities and investigates how Jewish organisations were forced to collaborate in the process of their own destruction.
The present research examines the limited agency of Jewish Councils, the deportation of protected groups such as members of “mixed families”, the importance of citizenship, and the despotism of individual perpetrators.
Contributions are based on the 2019 workshop Deportiert. Vergleichende Perspektiven auf die Organisation des Wegs in die Vernichtung, co-organised by the Vienna Wiesenthal Institute for Holocaust Studies (VWI) and the Austrian Academy of Sciences.