Modern Antisemitisms in the Peripheries 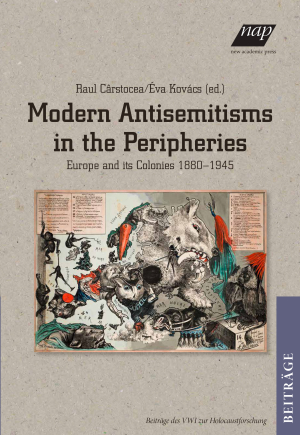 Studies of modern antisemitism have focussed primarily on Germany, as both the country where the phenomenon is seen to have originated and where it reached its genocidal culmination in the Holocaust. This has obscured to a certain extent the multiplicity of forms antisemitism took in spaces considered ‘peripheral’ to the European ‘centre’. This volume, the outcome of the Simon Wiesenthal Conference 2015, seeks to nuance such narratives by bringing to the discussion views from the peripheries.
The chapters cover a broad methodological, geographical and temporal scope, showing how a plurality of modern antisemitisms became prominent in Europe’s ‘peripheries’ – East and South, as well as in Europe’s colonies – reflecting both transfers and imports of concepts developed in the European ‘centre’ and specificities related to distinct developmental paths. They engage the entanglements of modern antisemitism, racism, and colonialism, to explore the ideological bonds and the transmission of these political ideas and practices. The volume thus zooms in on the multi-vector conceptual transfers that operated
between the centre and the peripheries, as well as on the impact of transnational contacts and social networks on antisemitic tropes and discourses.
The unifying context is that of globalisation and of a modernisation the global feature of which was its unevenness. It was this unevenness, and the resulting co-existence, incomplete overlap, and constant tension between different developmental horizons that in turn accounted for
the variety of forms antisemitism took across space and time.