Memorial Book for the Dead of the Mauthausen Concentration Camp 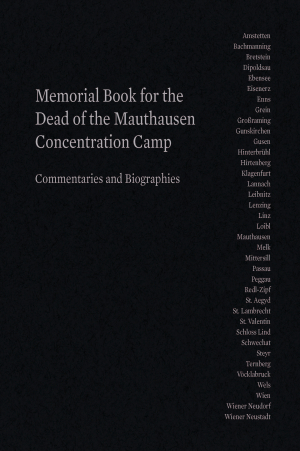 At least 90,000 people were murdered or died as a direct result of their captivity at the Mauthausen concentration camp and its satellite camps between August 1938 and May 1945. With the present book, the Mauthausen concentration camp memorial body seeks to commemorate the camp’s victims. The remembrance of the dead is one of the body’s central mandates – although society at large is also charged with this responsibility – commemorating Mauthausen’s victims according to the legacy of concentration camp survivors.
The names and details of over 84,000 people, whose identities were reconstructed through years long research, are given over two volumes. It should however be noted that names have been spelt according to the respective country of origin. This project saw many people and international institutions involved in an extraordinary international effort – survivors and survivor organisations, scientific bodies and archives, researchers and relatives of the victims as well as numerous embassies of the victims’ respective home countries. Only through this extensive cooperation was the present work made possible.
The accompanying volume consists of a scientific commentary as well as a biographical section. In the scientific articles, the history of the project and various editorial decisions are expanded upon, and the historical background is examined, placing the project in its larger context of the remembrance of Mauthausen’s victims. The second section of the accompanying volume presents over 300 personal, scientific and literary biographies which were written by over 250 project partners about the victims of the Mauthausen camp.