The Early Days of Survey Research and Their Importance Today 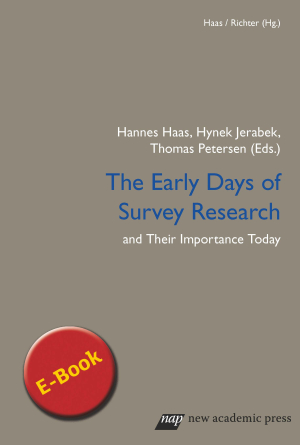 The idea for the book goes back to a conference held in 2010 at the
University of Vienna, a conference that was organized jointly by the
University of Vienna, the Charles University in Prague and the World
Association for Public Opinion Research (WAPOR). It is not a conference
publication in the classic sense, however, for along with a selection of
papers presented at the conference, it also contains a number of
articles written especially for this book. The book focuses not only on
simply describing the history of research in the field, but also on the
question of whether and to what extent todayx81’s social scientists
can learn from the creativity and methodological approaches employed by
the pioneers in the field. In this context, special emphasis is placed
on the role played by Paul F. Lazarsfeld: among all of the founders of
the field of empirical social research, Lazarsfeld and his unique
creativity probably left the strongest mark on the development of the
field. In addition, his work also merits special attention in light of
the key question of how scientists today can benefit from the
pioneersx81f achievements and approaches. Along with Lazarsfeldx81’s
achievements, of course, the book also pays tribute to theother pioneers
in the field, including George Gallup, Robert Merton and Hadley
Cantril, along with less well known researchers such as Hugo
Mu.nsterberg, GottliebSchnapper-Arndt and Roy Morgan.The historical
discussion offered in the book does not aim for completeness. Rather,the
examples presented are all intended to address the key question of how
scientists today can put the foundersx81′ experiences to good use.